In the first week (21-27 April) I started with my internship at the department of bioinformatics at Maastricht University. The project is from Egon Willighagen and it is about searching a new solution to cure Malaria by using systems biology. I will try to use a systems biology approach to analyse and to find a target which plays a role in the development of Malaria.

In ArrayExpress I search for dataset in which malaria was compared between healthy persons. From all the founded dataset I made a table. Finally I chose for a known dataset which I will further use in which they tested the changes in gene expression in people and with and without Malaria. In the subjects with Malaria they also tested the differences between pre-symptomatic and symptomatic changes in the disease.  And thereafter I will read some articles of people which did some research in the field of the effects of Malaria and a cure for Malaria and try to find some inks between them. And if possible even find a new cure to fight Malaria.

In this first week I have read some articles which I could use for my project. 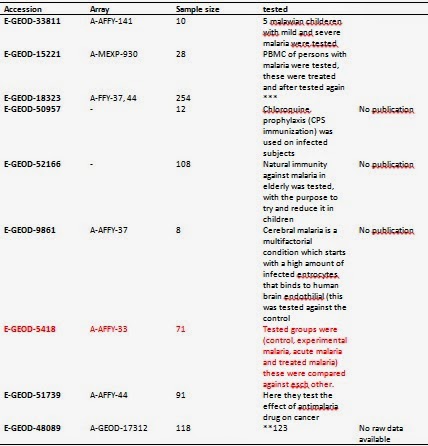 In one  article the author compared four different groups (a baseline, a group which they gave malaria, a group which has acute malaria, and a last group which is treated from malaria). Because I though this article might be useful for my project I run the dataset in arrayanalysis.org at the end of this week and planned to take a look at the results next week.